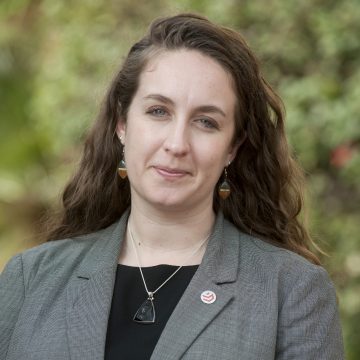 Ruby is the Climate Programs Senior Manager at Second Nature.  Her focus includes cross-sector climate action projects and initiatives.  That includes resilience efforts, internal carbon pricing, the Offset Network, and the University Climate Change Coalition (UC3).  Ruby helps campuses understand and develop their own resilience plans, offset strategies, and carbon pricing efforts.  Most previously, she was the Manager of Innovative Services at Second Nature.  Prior to that role, she was the New England Fellow for Second Nature, working with colleges and universities in the region to progress towards carbon neutrality and climate resilience.

Ruby holds a MBA focusing on sustainability and a MS in Environmental Science and Policy from Clark University. Her masters work focused on developing carbon credits on coffee farms through the voluntary carbon market. Previously Ruby served for three years as a Peace Corps Volunteer in Panama, where she worked primarily with coffee producers in rural communities. Ruby has also interned with a hydropower developer, and was a UNH Climate Fellow where she studied the impacts of climate change on New England agriculture.

Ruby graduated from the University of North Carolina at Chapel Hill with a B.S. in Chemistry. During her time there she studied abroad in Thailand at the Joint Graduate School of Energy and Environment.