What Climate Resilience Can Mean on Campuses

What Climate Resilience Can Mean on Campuses

In March 2019, Benjamin Newton, the sustainability director at Central Community College (CCC) in Grand Island, Nebraska, watched what meteorologists called a bomb cyclone. First came a snow storm that froze the land, then heavy rains that brought on intense flooding, and lastly heat.

“They say here in the Midwest you can experience all three seasons in one day. Well, that’s what happened that month,” said Newton. “When the weather warmed up after the storm, all the rivers were still frozen, but the ice started breaking up. Our rivers moved with one-ton ice chunks. It was like seeing a bunch of one-ton pick-up trucks floating down the river. That caused our worst flooding in 50 years.” 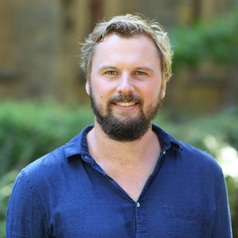 CCC is a rural community college with three campuses in Grand Island, Kearney, and Hastings. It serves students in 25 counties. In March 2019, the Federal Emergency Management Agency (FEMA) declared 24 of those 25 counties national emergency areas. About 70% of CCC students also live below the national poverty level, and the population includes immigrants from more than 50 countries. Several vulnerabilities in the CCC community compounded that month.

A few years before the bomb cyclone, Newton had started climate resilience workshops at CCC on what to do in an extreme weather event. The devastation in March 2019 was severe.

“In rural communities, we have a lack of first-responders that are trained, so preparing for natural disasters is crucial,” said Newton. “For example, I live in Grand Island, a city of 53,000 people, and within our whole country, there are two people that work for emergency management. So, we rely a lot on volunteers that get trained.”

Yet Newton said it could have been much worse if CCC hadn’t already been preparing not only its campus community but its neighbors.

“I offered it here on campus for the emergency management director to train our students, our staff, and anybody in the community on what to do if there’s a flood or a fire,” said Newton.

In around 2015, CCC signed a climate commitment with Second Nature, a nonprofit organization that works with higher education institutions on campus climate initiatives. The commitment included CCC making plans for climate resiliency, or how to adapt to anticipated climate stressors and shocks. The Grand Island campus had a flood diversion project that in 2019 spared that campus from major flooding.

“Rural communities are the least prepared but the most impacted by these extreme weather events, which are going on all over the country,” said Newton. “Most people think that sustainability happens on the coasts, but we have two campuses now that are completely carbon neutral.”

With many communities this year hit hard by Hurricane Ida and the California wildfires, more higher education institutions are looking to places like CCC and turning their attention to making their campuses resilient to the next extreme weather event. Yet some experts and campus sustainability leaders like Newton point out that resilience means more than outfitting buildings. It also involves working with people beyond the institution.

“A lot of campuses can operate in a bubble like their own community,” said Newton. “Well, at a community college, ‘community’ is in the name of your college.”

Back in 2018, Dr. Alexei Trundle, a research fellow in sustainable urban development at the University of Melbourne, and his research team published a report that surveyed 45 higher education institutions in several countries on how they were adapting to climate change.

The scientists benchmarked where institutions stood in planning ahead for the major impacts of their regions’ climate events. Unfortunately, most of the institutions surveyed fell short.

“The study was a bit ahead of its time,” said Trundle. “Not a lot of universities were dealing with adaptation then, but it was front-and-center with university managers. They placed adaptation in a risk management portfolio, which sat a long way from the sustainability managers.”

Yet at big institutions, that distance can be a problem, Trundle explained. Sustainability officers and university managers often almost speak in different languages.

“With university managers, it’s all about assets and heavy infrastructure, about engineering and governance and security,” said Trundle. “Whereas the sustainability officers talk more about technological innovation and social responsibility. But the conversation has shifted a long way since then.”

Because since 2018, Trundle has noticed more attention on these issues in higher education.

“The word ‘resilience’ itself is probably one of the biggest changes we’ve seen in how we talk about climate change,” he said. “I think the word ‘resilience’ has provided a bridge that has brought together disparate divisions within these fairly large institutions.”

Michael Moss, president of the Society for College and University Planning, an association of about 5,200 members that focuses on integrative planning in higher education, agrees that more campuses are working with greater urgency on this. He also noted the importance of institutions building relationships across disciplines and with external partners.

“The conversation has accelerated,” said Moss. “And what I am most excited about is that it has accelerated not from a siloed or singular point of view but has been tied into larger, systemic social issues that need to be solved. It’s not only about the most recent flood on my campus that I need to solve. Absolutely, solve that. And what do we do about how problems downstream connect to social justice? I think there’s a much more integrated conversation going on.”

At the University of Illinois Chicago (UIC), Dr. Cynthia Klein-Banai, the assistant vice chancellor and director of sustainability in the Office of Planning, Sustainability, and Project Management, stressed the significance of seeing the long-term benefit of a short-term cost on campus.

“For example, if we have intense windstorms and we have a tree canopy, it can be dangerous if the trees blow down onto something. But if you maintain the tree canopy regularly, although it could be costly, it can save you money later,” said Klein-Banai. “You can think about the cost of you taking down a tree after a storm versus pruning a few branches off the tree before the storm. That small step could be critical.”

UIC has also worked on developing their landscape and renovating existing buildings as less costly ways to be more resilient. With existing buildings, for instance, UIC has been bringing in geothermal heating and cooling systems to maintain comfortable temperatures year round.

Klein-Banai also noted the importance of equity in such conversations.

“When we as a campus say that we’re trying to be good stewards of the community, we should be mindful that we have this environmental impact,” said Klein-Banai, noting that UIC has been considered one of the most diverse higher education institutions in the country. It is a federally designated Hispanic Serving Institution. “We know that climate change affects lower resourced communities worse. They have less resilience. This is yet another way that we ought to be conscious of our impact on the communities around us.”

To Klein-Banai, resilience doesn’t have to just be in buildings. She pointed to a food recovery program at UIC that donates food from the campus dining halls to a local shelter that serves meals.

“That’s a kind of low-cost way of a university helping its community and creating resilient people, maybe not resilient buildings,” she said, noting what institutions without significant funding can do more broadly. “We shouldn’t just focus on infrastructure, especially if you have limited resources.”

At CCC in Nebraska, Newton continues to plan ahead for more community partnerships, no matter the scale.

Rebecca Kelliher can be reached at [email protected]