A carbon credit is tradable right that allows the holder to emit 1 ton of CO2. The credits can be issued based on the amount of CO2 absorbed by protecting forests or introducing renewable energy, for example. The effect of the emissions cuts is validated by a third party and the credits issued through these efforts can be traded on carbon markets.

Nikkei analyzed data going back to 2009 published by Verra, one of the world’s largest carbon offset accreditors, looking at some 99,000 credits used to offset emissions of 192 million tons of CO2. The data included the names of the companies that bought the credits.

Nikkei’s analysis found that 38% of the validated credits purchased by companies — equivalent to 73 million tons of CO2 — were over five years old, while more than 4% were at least 10 years old. Only 37% were three years old or less.

While older credits are not necessarily less effective than newer ones at reducing carbon emissions, they can hamper efforts to cut greenhouse gasses, because, once the credits are issued, it is rare for a third-party organization to monitor whether the projects upon which the credits were based, such as afforestation projects, were properly maintained. 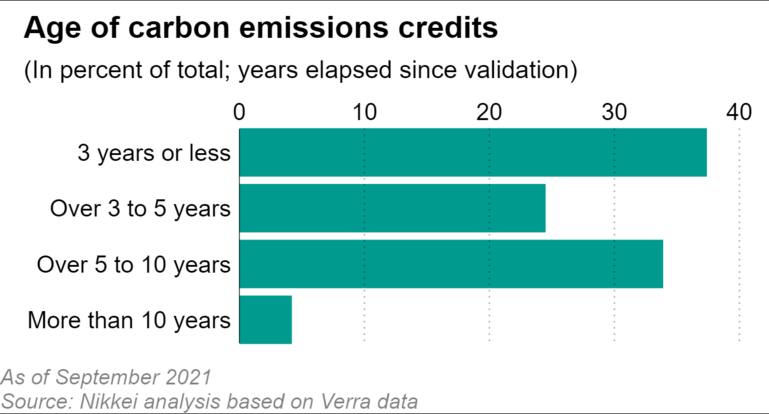 If issuers of credits can generate sufficient revenue from their carbon-cutting projects to expand their forest conservation and afforestation efforts, trading of emissions credits can contribute to global reductions in greenhouse gases. But if credits remain unsold and their prices drop, it will be difficult for issuers to keep projects going.

An afforestation project in central India, which issued credits between 2012 to 2014, provides a good illustration of the difficulties. Nikkei’s analysis of satellite images of the area show increasing clearance of trees in the project area and the construction of facilities, apparently solar panels.

An afforestation project in Uruguay meant to run for 100 years, for which carbon credits were issued in 2007 and were still trading last year, has come to a standstill, resulting in even greater deforestation.

If credits backing such failed projects continue to be traded, they will undermine global decarbonization efforts.

With forests exposed to ongoing risk of logging, experts say newer credits are preferable. According to Second Nature, a U.S. nonprofit organization working on climate change issues, “Offsets that are more than five years old are less desirable.”

But for the companies that trade them, all carbon credits are the same, regardless of when they were verified, when calculating CO2 emissions reductions.

“I think many market participants see older-vintage credits as a bit stale,” Cameron Hepburn, a professor at the University of Oxford, said.

But as carbon prices usually fall by roughly half after five years, some companies tout their emissions-cutting efforts by buying older, cheaper credits. With the emissions credit market split, these cheaper credits are attracting global companies.

The use of older carbon credits differs by industry. As of September 2021, Delta Air Lines was the largest buyer of credits older than five years, buying the equivalent of 7.28 million tons of CO2. That represented 45% of the U.S. airline’s offset purchases. “Verified carbon credits for projects that are active and closely monitored are still viable, even if they are of an older vintage,” a public relations official at Delta told Nikkei.

Energy giant Shell offset 79% of its emissions with credits older than five years. Luxury fashion labels and financial institutions, among others, were also active buyers of older credits.

“There is growing demand for additional due diligence, and more buyers are looking to ensure they do not have negative scrutiny later,” said Bill Goldie of Plannet Zero, a subsidiary of British carbon risk consulting company Redshaw Advisors.

Credits of deteriorating quality must be weeded out to make measures against global warming more effective. Albo Climate, an Israeli data analytics company, has developed a system to measure the absorption of CO2 by forests, and to inform companies and verification organizations when their effectiveness wanes.

Some experts say there should be markets for trading only in credits guaranteed through continuous verification. “It is time to discuss how to ensure the quality of credits, how both sellers and buyers shoulder costs,” said Toshihide Arimura, a professor at Waseda University.

It is necessary to create a mechanism to enhance the transparency of CO2 emissions reduction efforts through continual reviews, letting funds flow to high-quality credits.