We Are Still In

Second Nature helped coordinate a statement on behalf of governors, mayors, CEO’s and college and university leaders declaring that, despite the federal government’s decision to withdraw from the Paris Agreement, the nation remains committed to climate action.

This joint statement is the first time that these sectors have joined together publicly in a strong show of support for climate action that is so vital to the future of our country.

1. In the absence of Federal support, states, cities, colleges and universities and businesses will pursue ambitious climate goals, to ensure that the U.S. remains a global leader in reducing emissions.

2. In the U.S., the actors that will provide the leadership necessary to meet our Paris commitment are found in city halls, state capitals, colleges and universities and businesses.

3. We will remain actively engaged with the international community as part of the global effort to hold warming to under 2°C and to accelerate the transition to a clean energy economy that will benefit our security, prosperity, and health.

In order to participate, please submit the form on the We Are Still In webpage. We will respond to confirm with your president/chancellor.

WASI at the COPs

Dozens of America’s climate champions participate in the annual round of UN climate talks known as COPs (Conferences of the Parties).  At COP23 in November 2017 in Bonn, Germany, a group of university presidents, mayors, governors, and business leaders highlighted their steps to reduce climate pollution and stood in solidarity with international leaders, showing the world that US leadership on climate change extends well beyond federal policy. A similar program was held at COP24 in December 2018 in Poland. 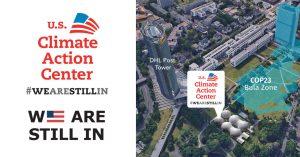 Visit the page for events held in the US Climate Action Center at COP23 and this page has the events at the COP24. 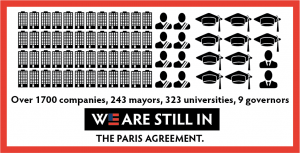 To learn more about the intent, process, and next steps about the initiative, visit our FAQ.