«Back to Primer Home

The following section highlights examples of how university leaders have not only helped to put a price on carbon within their own campus communities, but also how they have engaged with the external partners on carbon pricing policies. While this is not an exhaustive list of examples, it is meant to showcase cases from a range of colleges and universities, which can be added to over time. 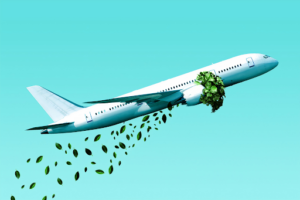 Photo by Morning Brew on Unsplash

At Arizona State University (ASU), leaders implemented a flat fee of $8 per round-trip flight to put a price on difficult-to-reduce scope 3 carbon emissions from University-sponsored air travel. Implemented in 2018, the carbon price was applied to over 21,100 flights and raised $169,000 during the 2019 fiscal year. Fund generated by the fee were then used to purchase local and community-based offsets to mitigate carbon emissions (~45,000 metric tons of CO2eq, MTCDE) and plant a forest of 1,000 native tree at ASU’s West Campus (Dalrymple, 2018 & 2019). In July 2019, Arizona State University increased the price of carbon for university-related, round-trip flights to $10, which helped the University recognize the full cost of carbon emission and develop more offset projects. 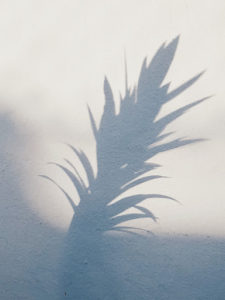 Photo by Martin Widenka on Unsplash

Starting in 2016, leaders at Swarthmore College established an internal carbon charge in partnership with community stakeholders as part of the Carbon Charge Program (Graf and Winslade, 2018). The program implemented a carbon levy of $23 per MTCDE on each department and office as a flat percentage of their total budgets (excluding salaries and benefits), which then contributes to the Carbon Charge Fund that supports renewable energy, energy efficiency upgrades, improved metering, emission reductions, and education initiatives. In 2019-20, the annual carbon fee raised over $300,000, which was allocated for: energy saving projects through the Green Revolving Fund ($200,000): research, analysis, strategic planning, and metering ($90,000); and for education, engagement, and learning opportunities ($10,000). Swarthmore’s internal carbon charge also places a shadow price of $100 MT per CO2eq to incorporate the negative impacts of its carbon emissions into institutional cost-benefit analyses (Richmond-Crosset, Graf, and Winslafe, 2019).

Proxy pricing at Smith College and beyond 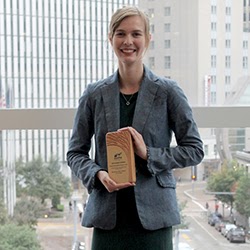 Student-led work has been an important part of Smith College’s effort. Breanna Parker ’18 (pictured above) completed an honors thesis called Designing a Proxy Carbon Price Strategy for Smith College, which won a national Campus Sustainability Research Award from the Association for the Advancement of Sustainability in Higher Education in 2018. Students have also applied the proxy price in an honors thesis in economics and capstone projects examining fleet vehicles and food purchasing. 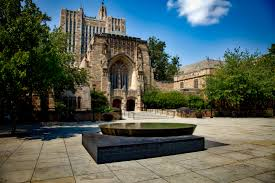 Building on the lessons learned from a 2015-2016 carbon charge pilot project, Yale University started implementing a revenue-neutral carbon fee from its buildings in 2017 as part of Yale’s Carbon Charge Project. With more than 250 buildings, collectively accounting for nearly 70% of Yale’s carbon emissions, each building is charged $40 per MTCDE of emissions – the estimated social cost associated with carbon emissions (Gillingham, Carattini, and Esty, 2017). Buildings that reduce their emissions more than the average receive a share of the funds collected, while those that increase their emissions receive a net charge (Yale University, 2020). The primary aim of the project is to test the effectiveness and feasibility of carbon pricing at Yale’s campus by using the university as a living laboratory and place for applied research. By incentivizing individual buildings to outperform the university as a whole, it was shown in early pilot studies that Yale could not only save money but also reduce its carbon emissions. Improvements to buildings like Betts House showed a 13% decrease in energy use due to the effect of carbon pricing (Yale University, 2016). According to other preliminary reports by the University, most buildings were able to reduce energy costs by either promoting more energy-efficient practices or by implementing new technologies, which has saved the University $135 per tCO2e (Laemel and Milikowsky, 2016).

In British Columbia (BC), Canada, the BC provincial government has placed a price on carbon, using two approaches:

The carbon tax, coupled with government regulation, requires that the University of British Columbia (UBC) pay CA$65 per MTCDE, which UBC is now addressing through the actions taken as part of their new Climate Action Plan 2020 (Madden, 2018). 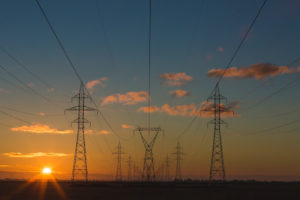 Photo by Matthew Henry on Unsplash

In 2007, Maryland joined the Regional Greenhouse Gas Initiative (RGGI), the first mandatory market-based program in the United States to reduce GHG emissions. RGGI is a cooperative agreement among 11 Northeastern and Mid-Atlantic states designed to reduce carbon emissions from major power generators through a cap and trade program. When Maryland entered the RGGI, the Maryland Department of the Environment commissioned the Center for Integrative Environmental Research at the University of Maryland (UMD) to study the role of energy efficiency spending in Maryland’s implementation of the RGGI (Matthias et al., 2008). In collaboration with researchers from Johns Hopkins University, Towson University, and the University of California Merced, UMD provided meaningful considerations related to the auctioning off 100% of Maryland’s RGGI allowances (permits) and use of the revenues for promoting energy efficiency in electricity consumption. In this way, UMD was able to provide meaningful information and analysis for decision-makers working with the State of Maryland to shape and implement a successful RGGI program.