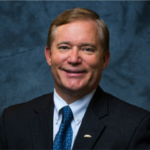 Dr. Scott D. Miller is one of the most experienced and prominent liberal arts college presidents in America, having led four colleges and universities for more than 27 years. Recognized by numerous books and publications nationally for his transformative leadership style, he was identified in the book The Entrepreneurial College President as one of 17 most entrepreneurial presidents in American higher education. He was recently listed on “The Power List,” an annual Inside Business feature recognizing those who have the most influence in shaping the Hampton Roads/Coastal Virginia region.

In 2015, he became President of Virginia Wesleyan, a highly regarded, national liberal arts college affiliated with the United Methodist Church. He is guiding the transformation of Virginia Wesleyan University from “an aspiring college to an inspiring university.”

Previously, Dr. Miller served as President at Bethany College in West Virginia (2007-15), Wesley College in Delaware (1997-2007) and Lincoln Memorial University in Tennessee (1991-97). At LMU, he was just 31 years old at the time of appointment, the youngest college president in the nation.

He earned his B.A. degree in communications from West Virginia Wesleyan College, worked as a journalist early in his career, and completed an M.A. from the University of Dayton. He earned an Ed.S. from Vanderbilt University and a Ph.D. from The Union Institute and University.

Dr. Miller has been married for 35 years to Annie Cook Miller, and they live in Ocean View. They have two adult daughters, Dr. Katie Miller Sanders and Ashlee Miller Upp.