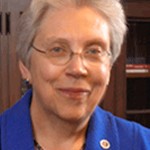 Dr. Judith A. Ramaley (pronounced Rah may lee) began her service as the 14th president of Winona State University on July 18, 2005. She was appointed to the WSU position by the Board of Trustees of Minnesota’s State Colleges and Universities (MnSCU) following a national search which concluded in March 2005. Dr. Ramaley replaced Dr. Darrell W. Krueger who had served as WSU’s president for 16 years until his retirement on July 15, 2005.

Prior to coming to Minnesota, she held a presidential professorship in biomedical sciences at the University of Maine and was a Fellow of the Margaret Chase Smith Center for Public Policy. She also completed a residency as a Visiting Senior Scientist at the National Academy of Sciences from January to June 2005.

From 2001-2004, Dr. Ramaley was Assistant Director, Education and Human Resources Directorate (EHR) at The National Science Foundation. The EHR Directorate is responsible for the health and continued vitality of the Nation’s science, technology, engineering and mathematics education and for providing leadership in the effort to improve education in these fields. During Dr. Ramaley’s tenure, the Directorate managed an annual budget of over $900 million. Prior to joining NSF, Dr. Ramaley was president of The University of Vermont (UVM) and professor of biology from July 1, 1997 to June 30, 2001. Before coming to UVM, she was President and professor of biology at Portland State University in Portland, Oregon for seven years (1990-1997.)

Dr. Ramaley has a special interest in higher-education reform and has played a significant role in designing regional alliances to promote educational cooperation. She also has contributed to national discussions about the changing nature of work and the workforce. She also plays a national role in the exploration of civic responsibility and the role of higher education in promoting good citizenship and has published extensively on educational reform, science, technology, engineering and mathematics education and the leadership of organizational change.