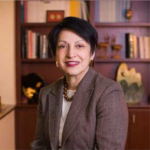 In August 2020, Dr. Elsa M. Núñez began her 15th year as the president of Eastern Connecticut State University.  She came to the University in 2006 following more than 20 years as a senior administrator at such institutions as City University of New York (CUNY) and the University of Maine System.

Dr. Núñez has been a tenured faculty member of English at Ramapo State College, the College of Staten Island (CUNY), and Lehman College (CUNY). She also holds a faculty position as Professor of English at Eastern.

Author of two books “Pursuing Diversity” (1992) and “Hanging Out and Hanging On: From the Projects to the Campus” (2014), Dr. Núñez also has published numerous articles on language acquisition, diversity and other education issues.

Dr. Núñez has firmly established Eastern’s reputation as Connecticut’s only public liberal arts university.  Academic enhancements range from an increase in full-time faculty positions to the development of new majors. Under Dr. Núñez’s leadership, Eastern is ranked by U.S. News and World Report as the top public New England regional university in the North; has been recognized 10 times by the Chronicle of Higher Education as a “Great College to Work For”; has been named a U.S. Green College by the Princeton Review 10 years in a row; and is recognized as one of the Top Workplaces in Connecticut by the Hartford Courant.

Dr. Núñez received her B.A. from Montclair State College, her M.A. from Fairleigh Dickinson University and her doctorate from Rutgers University.