One of the most anticipated COPs – COP26 – has now been over for a few days.  Our three Second Nature team members who attended in-person: Tim, Steve, and Noa are all back state-side, and are no longer jet lagged!  After giving them some time to reflect on their own COP26 experiences, I followed-up with them about their experiences.  The following are the end of COP26 related questions I asked them, and their responses. 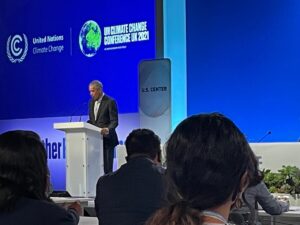 accountable and negotiate next steps in their transition toward clean energy, and civil society needs a way to influence this process.  That doesn’t mean that the process can’t be dramatically improved, though.  There is no reason the fossil fuel industry needs to be at the table, and we have to go to much greater lengths to ensure the most impacted countries are well-represented.” – Noa

“Yes – it’s an important global stakeholder engagement process.  Stakeholder engagement at any scale is challenging so kudos to the UNFCCC for organizing this process.  However, until the wealthiest nations agree to deep decarbonization efforts and support the developing nations financially in climate adaptation and climate loss and damages it is going to be difficult to maintain a 1.5C temperature increase.” – Steve

“Yes, gotta have international agreements and high-level country alignment around certain priorities that can form some sort of a floor, not a ceiling.  Necessary?  Yes.  Sufficient?  Not close.” – Tim

Most inspiring moment?
“Hearing island nations and developing nations call out the industrial, developed nations on their responsibility to 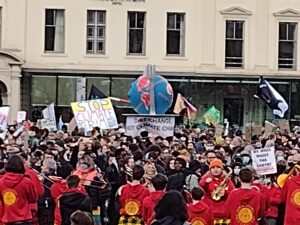 decarbonization and to financially support those that are being impacted now.” – Steve

“There are so many people working on different aspects of the climate crisis, and that on its own is so inspiring to me. I met youth that have been striking since they were 13, economists who abandoned their initial career plans in favor of trying to build an economic case for climate action, Indigenous activists who were basically working unpaid and around the clock to resist new pipeline infrastructure – the list goes on. It wasn’t a moment, but a collection of interactions.” – Noa

How would you define the “feeling” of COP26? In other words, was there a sense of urgency?  Celebration?  Etc?
“There is always the spectacle of COP that has a frenetic pace attached to it.  Definitely felt to me like there was aligned, forward-looking energy but not a moment of celebration.  Speed remains the big question.  Not where do 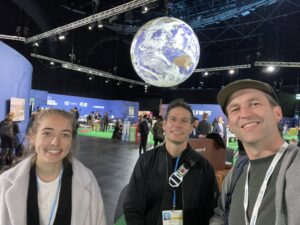 we go, but can we get there fast enough.” – Tim

“It felt optimistic – from all the activity being shared in the pavilions to the demonstrations outside of the conference. The world’s attention was focused on climate action.  There’s certainly tension between process and action but the intention is focused.” – Steve

“In the country pavilions, there are a lot of celebrations and self-congratulatory sessions, where countries and groups basically get to brag about the work they are doing.  It can sometimes feel disconnected from the actual negotiations, and there is definitely more of a hopeful feel to events than a doom-and-gloom feel.  However, protesters lining outside the venue, and many of the Indigenous-led events display a sense of urgency and despair.” – Noa

Most frustrating moment?
“I felt overwhelmed at how much some of us are fighting against this crisis while the major polluters probably have 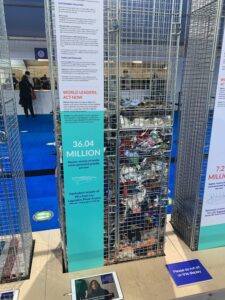 more influence than the rest of us combined. I attended an event where major polluters were literally greenwashing – Cargill was on a panel talking about its sustainability efforts, and Cargill is really one of the most destructive agribusinesses out there. No one pushed back on this presentation, either because they didn’t know or because COP doesn’t really promote that much back and forth dialogue. In any case, it was a super frustrating and actually pretty typical moment.” – Noa

“Hearing island nations and developing nations call out the industrial, developed nations on their responsibility to decarbonize and to financially support those that are being impacted now.” – Steve

What is one “COP26 ah-ha” moment you had?  In other words, if you hadn’t attended in-person, you wouldn’t have known?
“Even within the venue, most people don’t know what’s actually going on in the negotiations.  The negotiations are pretty much closed off to badged civil society, and so sometimes, the best way to learn what is actually going on is on the Internet.  Similarly, I was pretty shocked to learn how many people just weren’t that informed on the specifics of what was even being negotiated.  I definitely would have expected COP attendees to be more plugged into the conversation.” – Noa

Hopefully you enjoyed following us throughout COP26 both on social media and our COP26 Notes posts here on the Anecdotes page!  If you will be attending the fourth and final milestone of the Climate Action Pursuit, be sure to look for the COP26 Reflections session to hear even more from Tim, Steve, and Noa!