It’s transportation day here at COP26, and I am particularly intrigued by this thematic area. For one, transportation is the leading contributor of greenhouse gas emissions (GHG) in the US, so decarbonizing it is particularly relevant. Second, I’m speaking on a panel on decarbonizing the aviation industry tomorrow, and so I’m hoping to attend as many aviation-related events today as possible.

It’s also a beautiful day here in Glasgow, Scotland, and the sun is shining in a way I haven’t seen at any point throughout my past week and a half. So, though I’ve felt inclined to arrive at the convention center every day at 8am, today, I decided to go for a run through the Botanical Gardens and Kelvingrove Park, and then grabbed breakfast at the city center before heading into the venue for transportation day.

I started my day with a presentation at the US Center, led by Deputy Secretary of Energy David Turk, who talked about the importance of making hydrogen a more affordable and accessible energy source. I stuck around at the Transportation Center for a couple more hours, joining an event on “Coming Back Greener: Decarbonizing 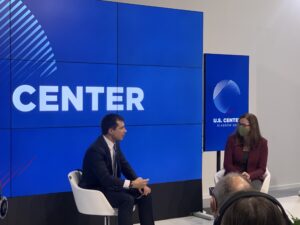 This was a phenomenal session – the two discussed the importance of communicating effectively, discussing climate change through a human-centered lens, and the way their faith grounds them in their activism.

“Climate policy is human policy,” Hayhoe said. “What mother doesn’t want her kids’ school bus to be electrically powered? The infrastructure bill is a climate bill, and the climate is changing faster now than any other time in history.”

At the US Center, I also attended an event called “Leading the Way for the Future of Flight”, where various US stakeholders discussed American efforts to decarbonize transportation. I then attended a high-level meeting hosted by the International Aviation Climate Ambition Coalition, as well as an action hub event hosted by the University of Cambridge – Accelerating Aviation to Action Hub Climate Neutrality.

Global aviation – including domestic and international passenger and freight flights – account for 1.9% of greenhouse gas emissions and  2.5% of carbon emissions. Experts project that other GHG emissions from burning jet fuels increases the climate impacts of aviation by more than three times than the impacts of carbon emissions alone. Sustainable aviation fuel (SAF) is a viable, medium-term contribution to a decarbonization pathway for aviation. Today, sustainable aviation fuel makes up less than 0.1% of the global aviation fuel supply, but that figure will need to reach 10 percent by 2030 and 100 percent by 2050 in order for the sector to decarbonize.

I broke up my day with some catch-ups and coffees. I had a great conversation with a coordinator from the US ACE Coalition, who discussed ongoing efforts to catalyze a society-wide effort for climate action, and met up with a delegation of Duke students that I’ve run into a couple of times at the conference. We discussed ways that Second Nature can play an expanded role in this coalition, such as by putting together a toolkit that can explain how universities can truly lead on climate, going beyond just decarbonization measures.

It’s my second to last day at COP26, and I’ve been reflecting a lot on my takeaways and experience here. In my last blog post, I’ll share some of these thoughts a little bit more extensively. But for now, I’ll just leave it at this: I’ve learned a lot, I’ve met a lot of fascinating people, I’ve stumbled across lots of prominent people, and advocated for the causes I am most passionate about. I’ve absorbed transformative lectures that have opened my eyes to both climate threats and opportunities of which I was not aware. I’ve sat in on negotiations and watched Island nations begging the wealthiest of nations to step up. I feel enormously lucky to have been here for this conference, and with that, I feel obligated to step up and fight against this climate crisis in a renewed way.

Don’t forget to come back to the Anecdotes page to read Noa’s last day at COP26 blog post!