It’s Monday afternoon in Glasgow, and I thought I’d start off with a bit of a weekend recap (as well as share what has been going on today). Lots of exciting things have happened since I last wrote, so this should be a fun one.

Where to start? Saturday is actually a hectic day at COP26, so it wasn’t the day off I initially expected. Nevertheless, it ended up probably being my favorite day of the trip. I started the morning with breakfast at a delicious vegan 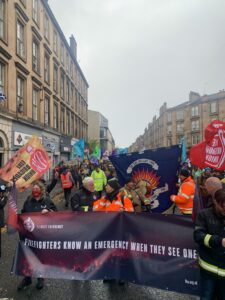 restaurant called Glasvegan, and devoured a pineapple veggie burger that was absolutely delicious. Then, I joined hundreds of thousands of protesters as they marched across the Saturday, calling on nations to adopt stronger climate measures. These protests gave me chills – people of all ages, races, backgrounds, and walks of life gathered to plead with leaders to do more to address the climate crisis. I’ve been to plenty of climate strikes before, but there was something very distinct about this one. For one, the diversity in the crowds was unlike any I had seen before, and signage across the board was absolutely beautiful and clever.

After that, I rushed back to the conference to attend a conversation with Congress members at the US Center. There was a pretty impressive line-up of legislators at this event, including Senator Ed Markey from my home state of Massachusetts, Senator Jon Ossoff of Georgia, Senator Brian Schatz of Hawaii, Senator Sheldon Whitehouse of Rhode Island, Senator Dick Durbin of Illinois, and several others. The conversation was pretty candid, and each spoke of their unique legislative priorities. Schatz, for example, discussed the urgent need to end deforestation and support communities in moving away from slash-and-burn agriculture, while Whitehouse discussed growing momentum for 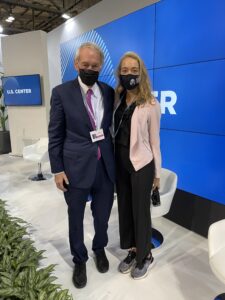 carbon pricing across different chambers of government. My favorite part of this event was getting to speak directly with the Senators at the event’s conclusion; they all lingered quite a while, and I was able to chat with them for a bit, which was pretty exciting.

Then, I attended a phenomenal event hosted by the National Caucus of Environmental Legislators (NCEL). Washington State Senator Reuven Carlyle, Rhode Island Senator Dawn Euer State Senator, Colorado Representative Dominique Jackson, and Hawaii Senator Chris Lee all spoke of the work going on in their states to mitigate climate change. It was a thoughtful and robust conversation around the power of states to pave the way for the federal government on a suite of climate issues.

“What happens at the state level [are policies] the federal government has not been able to do,” Senator Lee said. “We’ve been able to influence what kinds of policies our nation as a whole adopts.”

On Sunday, I took the train to Edinburgh, the capital of Scotland and a really beautiful city. I was able to explore Edinburgh Castle, hike Arthur’s Seat, explore the old town, and settle for dinner at a traditional Scottish pub with live 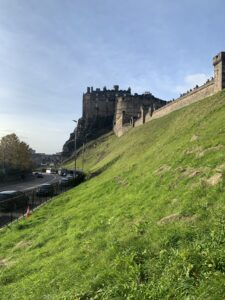 music, eating a nourishing lentil and vegetable pie that landed at the perfect intersection of traditional Scottish and vegan.

Then, this morning I got to COP early to beat what I anticipated would be long second week lines. Maybe I’ll stop here and explain – a lot of members of civil society come for one of the two weeks of the conference. So, given that today is the official beginning of the second week, there were tons of new faces here. That also means that some of the friends I made last week have left, so it almost feels like a brand-new conference, except for the fact that negotiations continue from where they left off before the Sunday break. Anyways, I knew the new people would translate into longer lines, so I walked to the conference early and joined a presentation at the US Climate Action Center centered around the decarbonization of the Midwest.

Then, for the main event – a Second Nature convened panel! No bias, I swear – this was an awesome, awesome event. Tim Carter, our President, moderated the conversation, and brought out pairs of leaders to join him on the 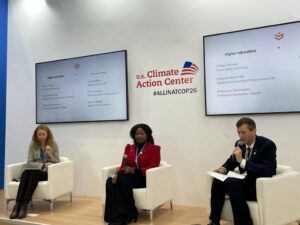 panel. Each panel included one higher education leader and one other leader in a related space, and the conversation was really fascinating.

First, Tim had Esther Oboyno, the Director of the Global Building Network at Penn State University join him alongside Lynda Hopkins, the Chairwoman of the Board of Supervisors of Sonoma County, CA. The two discussed meaningful community engagement, avoiding duplicative work, and relationship building in research spaces. Then, Peter Rothstein, the President of NECEC, and Suzanne Huminski, the Sustainability Coordinator at Southern Connecticut State University discussed how schools are able to decarbonize, implement energy efficiency measures and transition toward renewables. Finally, Mak Porotesano, the Coordinator of the Multicultural Center Coordinator at Portland Community College closed out the panel alongside Solemi Balagi of Pacific Climate Warriors. The two engaged in a robust conversation around social and climate justice, and making 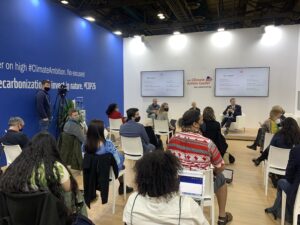 the environmental space in academia more inclusive for all. I was proud to be a Second Nature team member during this event!

It’s still midday here, but I’ll wrap up the blog post because my computer is about to die (per usual). I’ll fill in anything exciting that happens later today in tomorrow’s blog post. Bye for now!