It’s Day 4! I’m really getting in the rhythm of things. I got up especially early this morning to avoid the crowds, and took the ScotRail to the convention center (as COP26 delegates, we have free public transit passes for the duration of the conference, which is awesome). My plan worked pretty well — I got into the conference in just about twenty minutes, and was able to promptly begin my fourth day at COP26.

Before I discuss my day, I thought I’d share some observations from last night. I had dinner with a couple of friends I’ve made here at a restaurant in the city centre called The Citizen, enjoying some warm red vegetable curry and some hot tea (I’ve pretty much been cold since I got here, so I’ve taken every opportunity I can to warm up). As we were paying the tab, John Kerry walked in and sat at the table adjacent to us – it’s funny how normalized these interactions become at this conference, with so many world leaders packed into a relatively small city like Glasgow. One thing I’ve noticed is that I’m not particularly star-struck by famous people – I’ve noticed that I haven’t had any inclination to take photos with the big names I’ve run into, say hello to them, or really interact with them as though they are celebrities. Perhaps that’s because I recognize they are here to negotiate solutions to our climate crisis, not to make speeches and talk to fans. I’ve noticed how COP can become a bit of a race to find the big names, which I understand, because there’s probably no better venue to run into heads of states. That particular pursuit just hasn’t resonated with me.

Anyhow – I started my morning with an event on Inuit resilience and solutions to climate change in Arctic ecosystems at the World Wildlife Foundation Pavilion. This intimate conversation was rooted in upbringing and 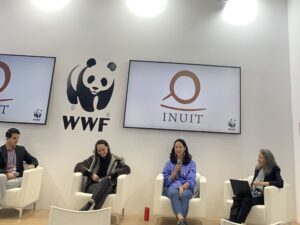 identity, and was a really eye-opening way to start the day.

After that, I attended a side event hosted by the Secretariat of the United Nations Framework Convention on Climate Change (UNFCCC). This event announced the launch of the Glasgow Declaration, which is a commitment to a decade of climate action in tourism. Carbon emissions from tourism grew by at least 60% from 2005 to 2016, and have the potential to rise by another 25% by 2030, if decarbonization efforts are not accelerated.

The declaration announced the sector’s shared commitment to unite all stakeholders in transforming tourism to deliver effective climate action, and that sector will ensure that their actions are aligned with the latest scientific recommendations. The Secretary General of the United Nations World Tourism Organization (UNWTO), Mr. Zurab Pololikashvili, discussed the urgent need to decarbonize the tourism sector.

Signatories of the Glasgow Declaration have committed to delivering climate action plans within 12 months of signing and implementing them. If they already have plans, they are supposed  to update or implement these plans. All signatories also commit to publicly report progress against both interim and long-term targets, as well as actions that are taken annually. This transparency component was described as a cornerstone of the Declaration. But, I couldn’t help and feel that the Declaration lacked teeth – after following UN declarations for the last few years, I’ve learned to take such announcements with a grain of salt.

This event was interesting – I’m glad that the sector’s emissions are being addressed, particularly in light of the fact that I’ve been thinking a lot about my own travels to get to this conference and the large carbon footprint each delegate here has. I’ve been wrestling with some of the guilt that comes with being here, and recognizing the privilege and responsibility that comes with such a trip. I’m more committed than ever to spend the rest of my life combating this crisis, and I know that I will be returning from COP particularly rejuvenated.

While I’m really enjoying my time here, learning a lot, and meeting tons of fascinating people, I worry that the negotiations are shaping up to be potentially very disappointing. More than 40 countries have agreed to phase out their use of coal-fired power, including Canada, Poland, South Korea, Ukraine, and Vietnam. Notably, the US, India, Australia, and China are missing from this pledge. I’ll be keeping my eye on similar announcements and also scrutinizing whether such declarations have accountability measures.

I attended a couple of other eye-opening side events and had some 1:1 meet-ups later in the afternoon before calling it a day. Signing off for now – but I’ll be back with a Day 5 update tomorrow!