Day 3! I started to feel like I was getting sick — probably a result of zero hours of sleep the first night I arrived in Glasgow — so I decided to wake up a little bit later, buy some fruits and vegetables that my body desperately craved, and go to the conference a bit later in the morning. The extra sleep certainly helped — I woke up feeling much better and enjoyed a beautiful, one-hour walk to the Scottish Exhibition Center. And, the nice thing is, I didn’t have to worry if it was COVID-19; my self-administered test came back negative right in my bedroom.

Today, I once again looked to attend as many state-level events as I could possibly find. Last night, I attended a roundtable event with White House National Climate Advisor Gina McCarthy, New Mexico Governor Michelle Lujan Grisham, Louisiana Governor John Bel Edwards, and California Lieutenant Governor Eleni Kounalakis. Each of the state officials spoke of ways their state has led the way in a particular policy area, and Gina McCarthy discussed how important this leadership was in setting guidance and precedent for the federal government. This event was in a small room convened by the America Is All In coalition, and attended by mostly subnational actors from the US.

I’ve always found state-level action to be really critical to paving the way for federal and international climate action, given that I come from a state-level climate policy background. So, I figured in today’s blog post, I could talk a little bit more about that work, particularly because it is driving a lot of my time here at COP26!

My full-time job is working as the Director of the State Climate Policy Network (SCPN) at a Boston-based, state-level nonprofit called Climate XChange. The SCPN is a network of more than 15,000 advocates, policymakers, business leaders, academics, and other individuals focused on advancing state-level climate policies that are effective and equitable. At a lot of the US state-level events I attended, I worked to recruit new individuals to join this network, as it provides tools like state policy updates, free deep dive webinars on a variety of climate topics, research and analysis on a host of climate policy topics, and national update calls bringing together campaign leaders from across the country. I also met a bunch of SCPN members who were in Glasgow themselves – it was great to see so many familiar faces (as well as familiar name tags of people that I had never actually seen before!)

I have to include a quick pitch to the higher education leaders who may be reading this blog post – the SCPN includes nearly 1,000 leaders in higher education, including professors, sustainability coordinators, facility managers, and administrators. If you’re interested in getting more engaged on state-level climate policy, you can sign up for the network here. I’m really passionate about getting all types of institutions involved in state-level climate policymaking, and higher education has the opportunity to play a critical role in this process (so many people I spoke to at the conference today echoed this sentiment!)

I spent some time exploring the country pavilions today, and also meeting up with some individuals in my network 1:1 that I had never had the opportunity to talk with face to face before, which was really exciting!

One small inconvenience that has really stood out to me is how difficult it is to find somewhere to charge your phone and computer. I was pretty much battling my devices dying all day, and found that as difficult as it was to find a quiet spot to do work, it was nearly impossible to find a quiet spot to recharge dying devices. There’s one hall near 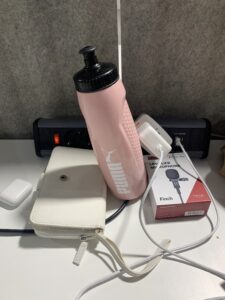 the negotiation So, I found myself trying to compose a Tweet while seeing that my phone is on 1%, or taking notes during an event only to watch it slowly shut off. I know this is a very privileged complaint to have, but I had to include this bit in order to accurately capture my experience. When a plug becomes available, people swarm to it like hawks, so it seems like everyone is struggling with this outlet shortage.

The rare available plug often doesn’t even work. In this photo, you can see a contraption that I built to hold in place my computer charger, using my wallet, water bottle, and my friend’s microphone. For some reason, it otherwise would not work. I did get some strange looks from delegates who were seated in the same plenary as me, but all that matters is that my computer is recharging as we speak.

Anyways, I’m signing off for Day 3! I’m excited to be joined by my two Second Nature colleagues, Tim Carter, our President, and Steve Muzzy, our Climate Programs Senior Manager, tomorrow.