Things are getting underway here at COP26! The lines this morning were pretty wild – I had to wait almost two hours just to get into the venue, which was frustrating but not the worst thing ever given the fact that the line is a perfect time to mingle with like-minded people. A lot of important people tried to sneak by, but security guards only made very limited exceptions for specific negotiators who had early-morning negotiations. I didn’t actually mind the line too much – I chatted with a woman working at a Brussels-based environmental nonprofit for a while, and had a fascinating conversation on subnational climate action. 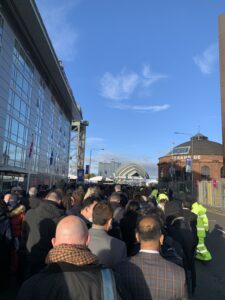 I spent the day attending a couple of America is All In meetings that were housed in the US Climate Action Center. America Is All In is a coalition* of cities, states, tribal nations, businesses, schools, and faith, health, and cultural institutions focused on advancing a climate strategy alongside the federal government. At COP25, the coalition was termed the We Are Still In coalition, and represented the American government’s only presence at the conference since the Trump-led US had pulled out of the Paris Agreement. This year, it is a supplemental presence to the American delegation, which is led by President Joe Biden and a slew of federal-level officials.

After that event, I attended a conversation on food systems convened by the World Health Organization. I’m personally really interested in combating factory farming and transforming our food systems, and learned a ton at a talk entitled “Achieving the Paris Agreement and preventing the next pandemic: the case for transformative, climate resilient, and healthy food systems.” This talk featured key leaders ProVeg International and the Tzu Chi foundation, as well as several other groups focused on transitioning away from factory farming. This was one of the only events I could find focused on animal agriculture at the conference so far, which is pretty shocking considering the fact that animal agriculture is such a major contributor to global climate. Dr. Marina Stephany, the Director of Farms Animal and Nutrition, spoke about a new Four Paws study that found the interconnection between human wellbeing, animal welfare, the environment, and pandemics. This event called on nations to set meat reduction targets as part of their procurement policies, an idea I found really exciting.

Dr. Stephany also outlined the connection between factory farming and pandemics, stating that we should move away from factory farming in the name of pandemic prevention. “Scientists from various fields agree that the influence of animal welfare on pandemics is significantly underestimated. 75% of infectious diseases are zoonoses and 50% of zoonoses are caused by agricultural drivers. Zoonoses are a symptom of a broken relationship between humans, animals, and nature.” Since 80% of antibiotics are used in animal agriculture, and animals are kept in stressful and cramped conditions, factory farming becomes a perfect breeding ground for pathogens.

I asked why the speakers believed animal agriculture was so under-discussed at this conference, and the speakers touched on some really interesting points, noting that there is a lack of political will to address this climate change contributor because of economic interests, the fact that people assume meat is beneficial for nutrition and health, and because culture and behavior prefer the status quo.

Dr. Stephany left the audience with a powerful closing statement: “The costs of the next pandemic, the climate crisis, and biodiversity loss is much greater than setting up a new food system. We need a paradigm shift toward an economy of wellbeing.”

Later, I attended a side event with the COP presidency and several Indigenous activists. This was one of the most powerful events I have ever attended. Fawn Sharp, the previous president of Quinault Nation and the current president of the National Congress on American Indians, discussed the importance of allowing Indigenous people to speak for themselves rather than speaking for them. “There’s a global perception that we are weak and vulnerable, and it is so far from the truth. We are strong, resilient, and connected to our natural world, physically and spiritually. We possess each and every timeless wisdom that the rest of the world does not possess.”

After that event, I attended a few others, and then after nearly 12 hours at the conference, I grabbed dinner at a phenomenal Indian restaurant right near the conference, Indian Quay. They had lots of vegan options and I ate a really flavorful lentil dish with vegetable pakora before embarking home, ready for a good night’s sleep.

*Second Nature is a member of the America Is All In coalition.