Call It What It Is and Then Do Something About It 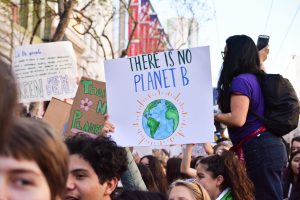 This post was written by Tim Carter, President of Second Nature

I ran across a new term today: Crisification. It doesn’t show up in any online dictionary, and I’m honestly not sure it’s a real word, but it seems to refer to the act of framing something as a crisis that may otherwise exist as a “problem” or “issue.”

Crisification happens in our household on a daily basis – my 13 year old son is “DYYYYING of thirst” or “STAAARving” because he hasn’t snacked in the past hour (c’mon man, you’re not kidding anyone).

One of the primary reasons to use crisification is that it generates strong responses and creates a sense of urgency. My son may not get the outcome he wants, but he knows that a reaction is forthcoming once he turns his subtle grumbles into crisis moans.

Crisification of climate action attempts to do the same thing – to change our perception about climate change from being a chronic, long-term (and far-off) phenomena to one that has acute and discrete events impacting us right now. Unlike my sons crisification demonstrations, this urgency is backed by the best science available. The alarm has been pulled and the strobe lights are going off. As the activist Greta Thunberg famously said at the World Economic Forum, “We should act as if the house is on fire, because it is.”

As the urgency to act decisively has ratcheted up, a number of sectors have begun using crisification to motivate aggressive action. Countries like the United Kingdom, Ireland, France, and Canada, along with hundreds of local jurisdictions have declared a “climate emergency” in recent years. And we’ve joined in this effort as well. Working with the UN and other international organizational partners, we launched a climate emergency effort for the global higher education community. At the annual Higher Education Sustainability Initiative meeting that was part of the UN High-Level Political Forum, we announced this initiative and encouraged the global higher education community to participate.

Admittedly, this is a bit of a risky undertaking. Climate solutions are not contingent on declaring climate emergencies. All the challenges to decarbonization remain. Yelling louder about a problem doesn’t make it go away. But it can be helpful to call a spade a spade. Being honest about our state of affairs may provoke part of the collective response we’ve been aiming for.

In Second Nature’s new strategic plan, we’ve identified the 50% decarbonization target by 2030 as a goal that we’ll be pushing our sector towards (at a minimum!). That’s consistent with what the Paris Agreement calls for and is a herculean lift given the recent global emissions reports. We feel the imperative and are embracing it as a new phase in our maturity.

So we need to shake ourselves up. We need to do whatever we can to take away the status quo of incremental climate action and be gripped by the need to make big moves. We may be in the midst of a crisis, but that doesn’t mean we need to stay here. Let’s be honest about the daunting challenge we face, and rally behind the solutions that can get us to where we need to be.