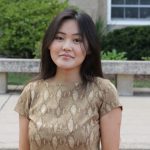 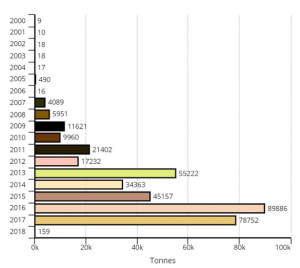 As most schools purchase carbon offsets at sporadic times, it is hard to establish a steady growth rate trend. As shown in Graph A, starting in 2013, the amount of carbon offsets schools purchased drastically increased. 2016 was the year the largest total amount of offsets, 89,886 tonnes, were purchased, however it’s possible that not all schools have reported on their 2017 data yet. 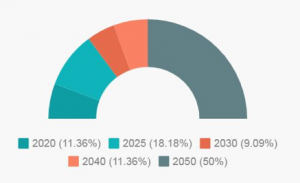 Graph B: Carbon neutrality dates of schools that purchase offsets.

What types of offset projects do schools invest in?

The schools buy offsets from third-party sellers such as environmental non-profits or carbon offset providers. Based on their data, most projects the schools are investing in are related to energy efficiency at a domestic level such as renewable energy, conversion of a landfill to methane, LEED buildings, electric transportation, etc. But there are some international projects the schools would invest in, for instance reforestation in Chile or clean cookstoves in Kenya.

What does this mean for campuses?