We Spent a Week in San Francisco Talking About Climate Action: Here’s What We Learned

By Gina Stovall and Ruby Woodside

Last week people from around the world came together at the Global Climate Action Summit (GCAS) with the goal to “take ambition to the next level.” Second Nature President Tim Carter, Innovative Services Manager Ruby Woodside, and Cross-Sector Climate Manager Gina Stovall attended. Read a few of our takeaways from the events!

Our week in San Francisco started off hopeful with researchers determined to make sure science did not fall by the wayside in our fight against climate change. Science to Action Day, brought together researchers, businesses, subnational governments, and other stakeholders to focus on how research, across natural and social sciences, is advancing climate action on the ground. One of the main discussion points was how scientists can better support ambitious action on climate change. A key outcome was a declaration by participating researchers reaffirming their support of decision-makers to create  science based targets and climate solutions:

“As scientists and members of institutions engaged in science, we commit to working as respectful partners to tackle climate change, offering our insights alongside other expertise as part of a collaborative approach to address the challenges of climate change.”

Wednesday was the last day of side events before the main summit commenced, and a big day for the University Climate Change Coalition (UC3). The We Are Still In Forum gave We Are Still In signatories an opportunity to strategize with and learn from  different sectors in a series of keynote addresses, panels, and working groups. The forum reported on the coalition’s collective climate action to date and highlighted the need to build strategies that accelerate climate action. Notably, University of California President Janet Napolitano delivered a speech on the important role the higher education sector plays in climate action, and announced the five new UC3 members and 2018 progress report: Research for Solutions: Convening Stakeholders to Galvanize Local Climate Action. Nine of the UC3 campuses attended the forum and presented posters on their cross-sector work, including University of Arizona and Washington University in St. Louis. University of Arizona and Washington University in St. Louis are two of the five new additions to the coalition which also include Boston University, University of Connecticut, and the University of South Florida. 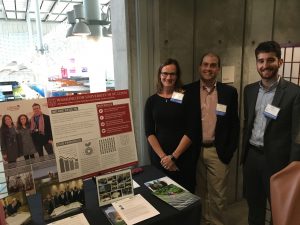 Day 3 & 4: Organizations & Governments from around the world are making ambitious strides

Pledges and high-level announcements dominated the GCAS main stage event. Some were quite ambitious and inspiring, and we hope companies and governments are able to follow through. The affiliate events delved deeper into climate solutions, and had more nuanced conversations. The Higher Education Leadership on Carbon Pricing event highlighted how campuses are exploring innovative models to price carbon internally. Participating schools, including Swarthmore College, Smith College, Arizona State University, and Yale University, discussed the challenges and opportunities associated with carbon pricing. 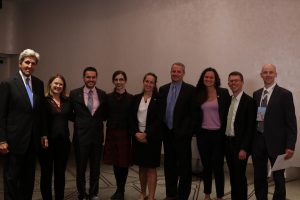 GCAS reminded us that meeting the Paris Agreement will require extraordinary cross-sector and international collaboration. The event underscored the diversity of actors working to meet the Paris Agreement, from state governments to city officials to business leaders to activists. And of course, higher education has a critical role to play. These actors are not always in agreement; on the first day protesters blocked the main entrance to GCAS, asking Governor Jerry Brown to halt drilling in the state. Still, we were impressed by the variety of GCAS participants and the passion driving their climate work. There is a lot to be done. Climate-driven storms and wildfires now seem a daily reality in the United States. However, there is progress being made and increasing energy focused on finding solutions. If colleges and universities continue to step up, we may be on our way to bending the curve.