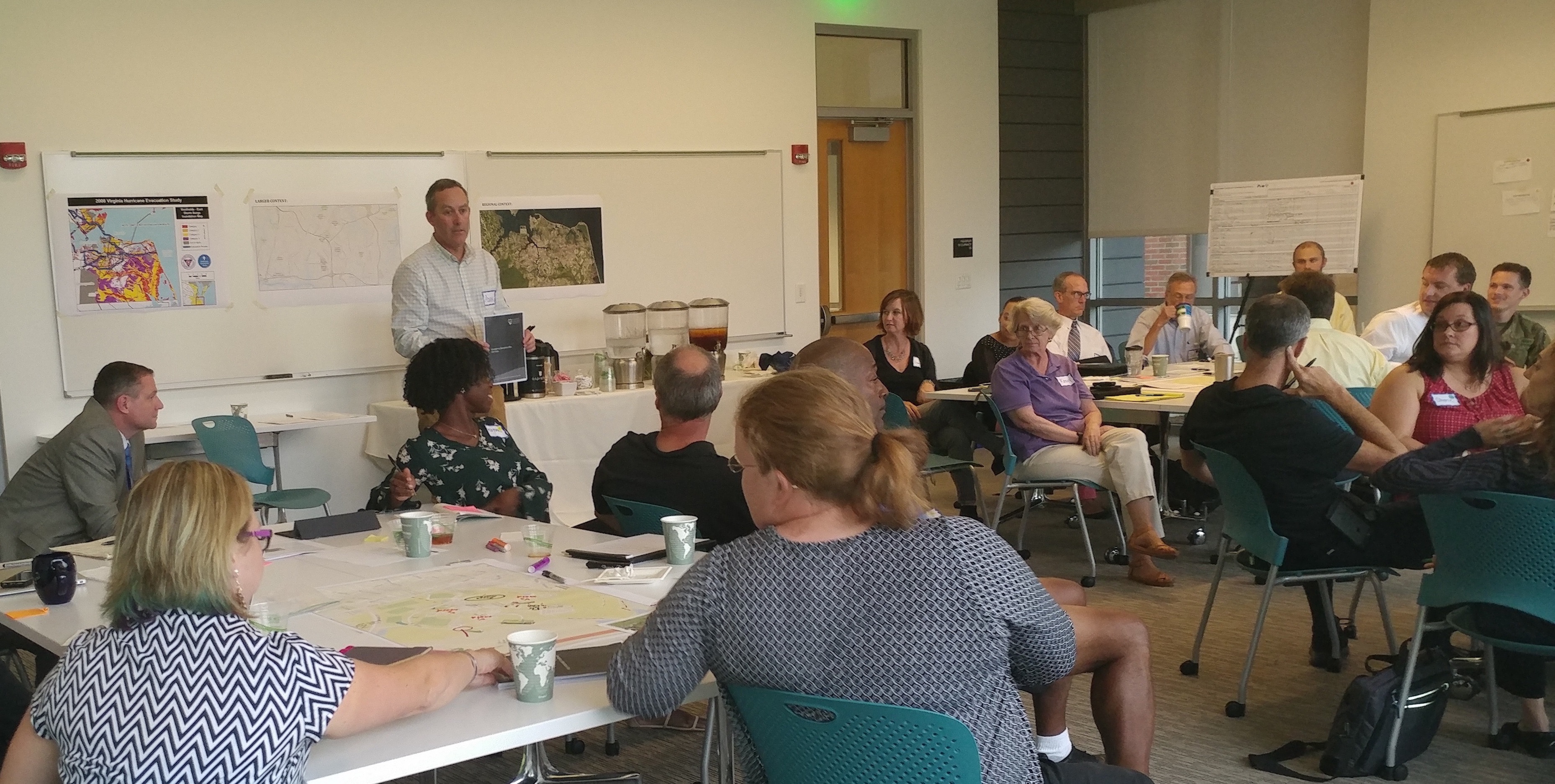 This a logical progression for a long-time president who has always made climate-related issues a top priority and an affirmation of Virginia Wesleyan’s position as a national leader on the topic.

“The Presidents’ Climate Leadership Commitments are more than just a declaration or statement,” Miller said in a recent message to the Virginia Wesleyan community, “they are a catalyst for rigorous and robust action on our campus and in our community. We continue our enthusiasm in exploring and implementing sustainability initiatives as part of this effort, and as always, we welcome ideas and feedback as we progress with this very important work.”

Over the last year and a half, the Virginia Wesleyan community has been actively engaged in a key component of that important work in the form of long-term resilience planning. This planning came about as a result of a partnership between VWU, Second Nature and The Nature Conservancy focusing on increased awareness of risks from natural and climate-related hazards. In October 2017, a campus-based core team organized and facilitated a Community Resilience Building Workshop in support of the University’s Climate Commitment via Second Nature.

The University’s President’s Environmental Issues Council (PEIC) oversaw the workshop planning process. The PEIC, as described on the University’s website, “promotes a strong environmental ethic and cultivates sustainable policies, practices and curricula throughout the University” and “works with campus leaders to address environmental issues on campus and to promote conservation and environmental stewardship” at Virginia Wesleyan. The PEIC is comprised of faculty, staff, student and alumni representatives.

After receiving administrative approval in late 2016, it took approximately a year to plan and execute the Community Resilience Building Workshop at VWU. Funding was provided from the administrative level. The PEIC considered a number of models for the workshop including the possibility of conducting surveys or interviews with key constituents beforehand or dividing the workshop in several sessions.

PEIC members determined that the discussion generated in an intensive one-day workshop with a diverse group of participants would be the most feasible and productive approach, generating new ideas and a shared sense of purpose. A concentrated, dynamic process, it was decided, would also be a good fit for a small private liberal arts school such as Virginia Wesleyan, where the core value of “supportive community” is described as one in which “meaningful relationships are developed through individualized attention in an inclusive environment of caring and mutual respect.”

The University was fortunate to be among the first higher education institutions to work directly with Second Nature on the Community Resilience Building Workshop and to have Adam Whelchel of the Nature Conservancy, who created the Community Resilience Building Workshop model, offer to serve as our lead facilitator.  Three additional small group facilitators from the Nature Conservancy, experienced in implementing this model, joined us.

The choice of venue for the day-long workshop was a fairly clear-cut one because the selected date for the workshop—October 12, 2017—came just a few months after the grand opening and dedication of the University’s Greer Environmental Sciences Center. In addition to obvious benefits of convenience and cost savings, the Greer Center is considered the crown jewel of the University’s growing environmental sciences program, embodying “science on display” and promoting hands-on learning, interdisciplinary research and community collaboration—thus making it the perfect backdrop for an inclusive discussion about resilience. Lunch was provided at the venue as part of the workshop, which took place from 10 a.m.-3 p.m.

The PEIC chose broad representation from the campus community to participate in the workshop including faculty, staff, students and alumni with professional affiliations relevant to the topic. Faculty and staff members were chosen from a variety of offices and academic departments representing various aspects of instruction, campus life and administrative operations. Student participants included representatives of student government, the PEIC, student environmental groups, and the Earth and Environmental Sciences major.

Invitations to participate came from the VWU President’s Office. There were approximately 25 participants in all, organized in groups of about eight per table in the workshop space—each table a diverse mixture of students, alumni, faculty and staff. The PEIC also assigned three scribes (two students and one staff member) to record the discussion in detail rather than participating directly.

The day began with a welcome from VWU Provost and Vice President Timothy O’Rourke. Christine Morris, Chief Resilience Officer for the City of Norfolk, Virginia, followed up with a guest presentation that helped set the tone for the day, providing a broader community context for the issues to be discussed and emphasizing the importance of the process and the role of workshop participants in driving that process.

As described in the summary of findings from the workshop: “VWU employed a unique ‘anywhere at any scale,’ community-driven process known as the Community Resilience Building Workshop (www.CommunityResilienceBuilding.com). The CRB’s Risk Matrix and various science-based tools were integrated into the workshop process to provide both decision-support and risk visualization around shared values and priorities across the campus.”

Lead facilitator Adam Welchel began the process by having each participant define resilience by writing it on a piece of paper and saving it for reflection at the end of the day. Each group was then directed to discuss resilience hazards and came up with a top three with the assistance of a facilitator at each table moderating the discussion. The facilitators made lists, and then each table shared their hazards with the group.  The top three hazards identified by the group were 1) flooding from hurricanes, tropical storms and the indirect impact of sea level rise, 2) extreme precipitation and wind events, and 3) winter storms.

The groups then worked on developing a risk matrix in which campus features were identified as either strengths or vulnerabilities in relation to three established hazards. These features were divided into three categories: infrastructure, societal and environmental. From there, the discussion turned to possible actions for reducing the vulnerability or maintaining the strength of certain identified features. Then each group chose three features that they thought should be the top priority.

The summary of findings from the workshop lists all of the recommendations for improving resilience divided into those that are highest, moderate and lower priority.  Highest priority recommendations related to topics such as drainage systems and storm water runoff; landscaping and infrastructure; technology and communications; generators and alternative power options; and community partnerships and campus involvement. A common thread throughout the workshop discussions was the recognition of the need to improve “longer term community-based, contingency planning across all areas of concern.”

Reflections from participants at the conclusion of the process were overwhelmingly positive. Participants appeared to be engaged, and there was a significant amount of overlap in the concerns and ideas that were generated as a result. The student and alumni participants, in particular, offered fresh perspective and demonstrated a sincere commitment to the process.

Although the format Virginia Wesleyan chose for the Community Resilience Building Workshop was primarily an internal one—made up of members the VWU community and addressing resiliency as it relates to the University’s physical campus and its inhabitants—the importance of how our actions both affect and depend on others was ever-present.

“The need for academic institutions, municipalities, regional planning organizations, states and federal agencies to increase resilience and adapt to extreme weather events and a changing climate is strikingly evident amongst the communities of Virginia’s Hampton Roads area,” notes the workshop’s summary of findings. “Recent events such as Superstorm Sandy have reinforced this urgency and compelled leading communities like Virginia Wesleyan University to proactively collaborate on planning and mitigating potential risks. Ultimately, this type of leadership is to be commended because it will reduce the vulnerability of campus and municipal residents, infrastructure and ecosystems and serve as a model for other communities in the state of Virginia and across the nation.”

Virginia Wesleyan University will continue its long-term resilience building process with the completion of a resilience assessment later this year.