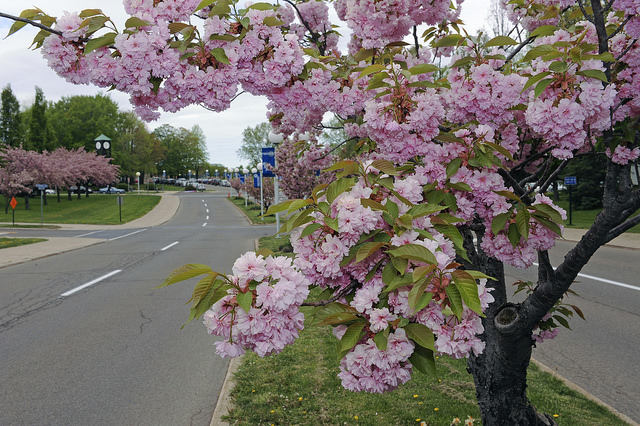 This post was written by Climate Programs Intern Aviva Gersovitch

I came to the environmental movement from a cognitive science, psychology, and biology background. Therefore, I am interested in bot

h hard science and the messaging and framing that impacts how people receive and react to the science. Something I’ve noticed recently during my time at Second Nature is the various ways that people talk about future climate change scenario predictions. There have been two camps that have stood out to me-  those who post eye-catching, sensational headline articles that propagate that humans have passed the point of no return, vs those who focus on the more positive messaging and movement building around the message that we have the power to take the future back into our own hands.

You’ve probably seen this article from David Wallace-Wells at the New York Magazine floating around recently, just one more in a series of doom and gloom science-backed publications reminding us that the end is nigh thanks to us and that we’re headed for the edge of a cliff that is nearing by the minute. The author claimed that this article was the most read in the website’s history. However, there has been a large backlash from many scientists cautioning that the article overstates current scientific conclusions. In contrast, there have also been several responses published in favor of the doom-and-gloom types of articles, even some arguing that Wallace-Wells’s article is not alarmist enough. They stress that these articles are meant to galvanize not individual asceticism and guilt for the greater good, but rather collective action to elect leaders that care about and take steps to address these issues. This is a particularly important message in our present political climate.

So what is the value of alarmist publications such as these vs the more hopeful climate related movements? Wallace-Wells argues that there are too many people not scared enough and lulled into a false sense of security and complacency, vs people that are too scared. I think that which type of messaging spurs you to action is dependent in large part on personality type and your energy level or mood when you read them. On certain days, reading the alarmist publications freezes my blood and causes me to want to commit to doing everything I can to both reduce my environmental footprint as well as take action to influence policy and become more involved in activism. On other days, I can’t even read these types of articles because they are horridly depressing among a host of other societal problems that are constantly coming at me through news and media channels.

The article makes an interesting point – people love zombie and other post-apocalyptic movies that seem to be all the rage in popular culture today, but when it comes to real life ‘end of the world’ scenarios, like to turn the other cheek and insist that it’s not really that bad.

During my internship with Second Nature, I have been focused on climate resilience, and how institutions of higher education can partner with their surrounding communities in order to ensure an inclusive climate resilience and disaster adaptation plan. I am particularly interested, being that I am currently studying macro social work, on how to make climate resilience planning more equitable. The most vulnerable populations: the elderly, people of color, indigenous populations, are the ones that will bear the brunt of climate caused disasters. The poorest and most disadvantaged countries in the world are the ones who lack the resources to deal with the consequences of a warming planet, and they are also the ones who will face some of the most dire effects of it. So we can argue the science all day, and dispute how bad it will really get. But at the end of the day, it doesn’t matter the timeline, it matters that it is already way past the action due date, and people are hurting. I think it’s time to leave the minutia of the science to the scientists and focus on what the common people can influence.

There are numerous grassroots, often youth-led environmental movements that are springing up in our current bleak circumstances. A common thread between many of these movements is the need to put pressure on politicians in order to make meaningful environmental policy changes, since individual action is simply not enough on our warming planet. One in particular that stands out to me as the antithesis of the dark and pessimistic viewpoints is the Sunrise Movement. Formed by young climate activists fed up with the corrupt inter-relation of politics and fossil fuel interests, the messaging and language around this movement are hopeful, positive, and forward-moving. Everything from the logo to the name to the #ShineALight campaign is focused on harnessing positive energy to create something new and different. This movement targets young people, especially teens and twenty-somethings, as this age bracket has the energy, time, and the highest stake in the game. It is our future that is directly in question. Movements like Sunrise seek to channel the uncertain energy that is generated from learning about all of the terrifying climate realities that we will soon face. Young people are alarmed and angry and unsure what to do. This is where these powerful movements come in, by giving people a community, a voice, and a purpose and path of action.

Ultimately, I believe that there is value in the negative and scary science and even the occasional pseudo-science of the alarmist types of articles, because they have the effect of frightening us, and sometimes fear and necessity and urgency can catalyze the change that is needed. Though it may lead to frustration and apathy, it can also breed a distrust of politicians and a desire to influence and shift the way our current system works. That is a potent energy for the new and inspirational climate movements to harness and capitalize upon. In fact, perhaps one could even say that both the pessimism of extreme climate science and the optimism of climate movements are necessary, and together they create the conditions for people to want to take action and then ensure that they possess the avenues to do so.

Through working at Second Nature, I have helped develop resources for the higher education sector to use in forming climate resilience plans for the university and surrounding community. Institutions of higher learning are often the breeding ground for young, passionate people that have the knowledge and drive to take on the complex issue of climate change. I am filled with hope when I consider that my work and learning here are assisting some of the places where the new wave of climate leaders will originate from, as well as helping me learn more so I can contribute to shifting the tide of our future.