Getting to Carbon Neutrality at Middlebury in 2016: Round 1 Take-Aways 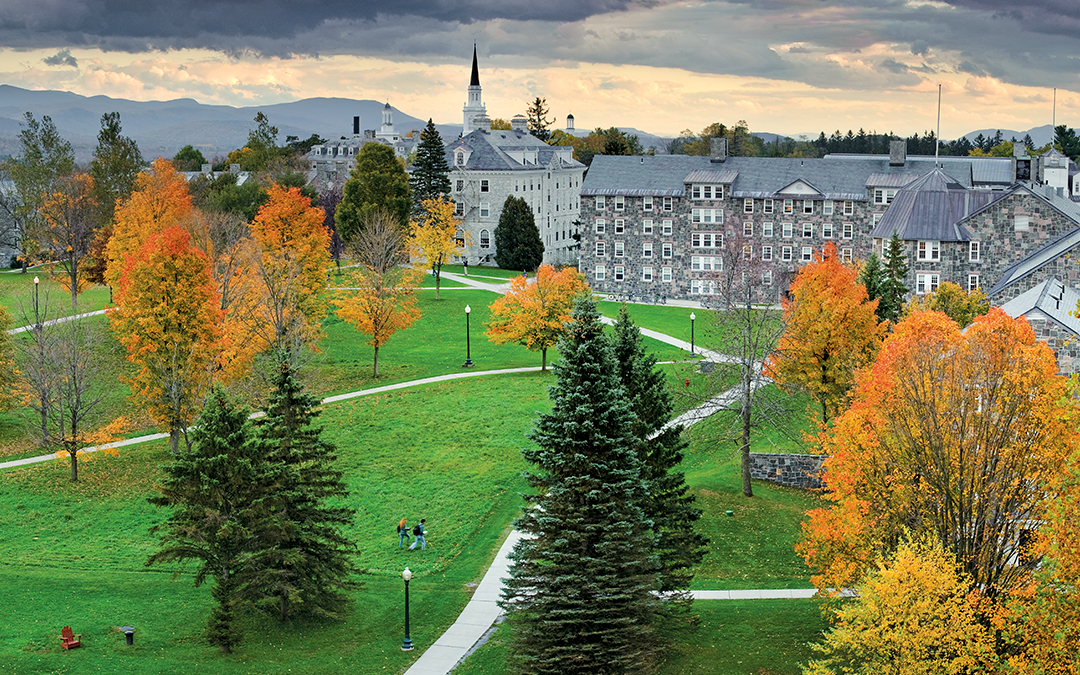 In December, 2016 Middlebury achieved its goal of carbon neutrality by 2016. This goal had been established by a resolution of the Board of Trustees in 2007. Their commitment followed achievement of an earlier carbon reduction goal and subsequent urging of the College community, after significant groundwork had been done, to establish a goal and pathway for getting to neutrality by 2016. Middlebury subsequently signed the American College and University Presidents Climate Commitment and went to work. It is the third College in the country to have achieved carbon neutrality by a certain date.

As a former Middlebury trustee remarked upon the occasion of achieving neutrality, “An awful lot of carbon neutrality is definitional. By some definitions there is still plenty of work to do.” That’s a concise perspective on where Middlebury College is while it pauses at this milestone in its long history of moving the dial on sustainability and climate leadership in higher education. It is also indicative of the case that there are numerous options for achieving neutrality and that institutions who make a commitment can chart their own course depending on local and regional circumstances and the resources uniquely available to them.

• conversion of its primary fuel source for heating, cooling and powering the campus from #6 oil to biomass gasification;

• efficiency and conservation projects which reduced demand for electricity by 4.5 million kWh and 15-20 percent reduction in demand;

• and the conservation of 2,100 acres of forest land it owned through an easement given to the Vermont Land Trust with minimal forest harvest allowed under very strict conditions in perpetuity.

We have posted a longer piece describing our process, our basis for neutrality, and where we go next on our website. I offer a few take-aways about our 9-year journey to neutrality here.

In the absence of a national system for regulating and monitoring carbon emissions those who voluntarily choose to set reduction goals must define the boundaries within which they will take responsibility and account for emissions. Middlebury counts all carbon emissions from sources it owns or controls at its main campus, its Breadloaf Campus and its Snow Bowl ski area. We started with about 31,000 metric tonnes of carbon dioxide and equivalents in 2007. 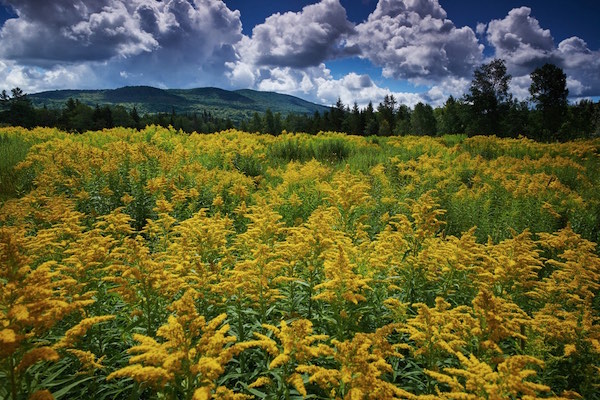 As time went on we also realized that we also had a boundary that included the lands the college owned (about 6,000 acres of forest and farmland) as well as other privately owned lands where we sourced wood for our biomass gasification system which played a significant role in our neutrality efforts. 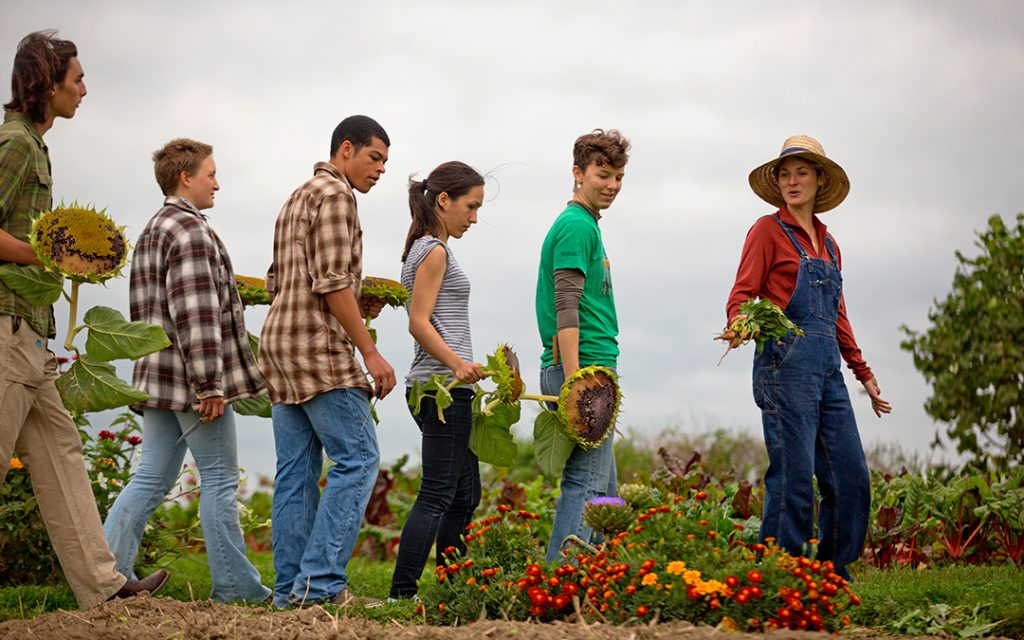 The Middlebury College Organic Farm grows food for the dining halls and local restaurants, and serves as a meeting place for workshops, classes and social gatherings

According to the accounting rules for carbon, biomass emissions are counted “when the trees are cut” and not when they are burned. The College needed to look at the net growth of the forests where its wood came from to assure that its emissions from biomass were “neutralized” by forests growing faster than they were being harvested which has been the case. Had it been the opposite we’d have to be looking for other ways to count reductions in emissions.

Middlebury owned 6,000 acres of land that were sequestering carbon at rates that likely resulted in a net reduction of carbon compared to emissions from those lands. But we could not count that unless and until any of those acres were permanently conserved. That opportunity came along when the College gave a perpetual easement for 2,100 acres of forest lands to the Vermont Land Trust for multiple uses (recreation, wilderness, flood protection, biodiversity, habitat protection, etc.).

The easement prohibits any harvesting of trees (except for ecological purposes). It also includes a provision to allow the College to quantify the carbon sequestration on those lands and to register for credits on the American Carbon Registry. Some of the credits are being bought back to offset some of our emissions. Excess credits are being sold to underwrite the costs of the project.

We drew clear geographical and ownership boundaries around emissions sources to account for carbon we produced directly and to avoid counting emissions from sources we don’t (e.g., emissions from daily deliveries of food and supplies by independent trucking companies). As we worked toward our goals we came to more fully appreciate our reliance on a much wider local geography and ownership for our neutrality, particularly the land resources mentioned above.

We understand more fully how stewardship and legal protection of our own lands were critical, not only to our carbon neutrality efforts, but also to the many people and communities who used and valued those lands for their numerous benefits in addition to carbon sequestration.

We also more fully appreciate our reliance on the stewardship and protection exercised by the many private landowners from whose lands we obtain our fuel supply to heat and power the campus daily. Without their careful and sustainable land management practices, we’d find it difficult to be comfortable calling our source of wood renewable and carbon neutral. By and large, Vermont landowners are good stewards and we benefit from their love and care for the land and the many co-benefits that derive from their ecological practices. It is a situation that can change with the times and we need to work further to find ways to build closer ties and relationships with the people upon whose nearby lands we rely on for our fuel.

It’s been said often that what gets measured gets done. There’s truth to that and quantifying and measuring carbon emissions at Middlebury was an important step in our journey to neutrality. It helped a lot that we could attach a cost to the carbon we were emitting – we quantified it in terms of the cost of switching from fuel oil to biomass – and the fuel price and carbon differentials were very positive drivers over the long run.

We are quantifying the annual sequestration of carbon on conserved lands and putting a price on that via registry and sales of the credits on a carbon market and buying back some of those credits for our own purposes as well. And we are now piloting a project to quantify the cost of carbon associated with College related travel and testing a surcharge on that carbon to help fund travel offsets.

While Middlebury has charted its own way to neutrality it’s been done with a great deal of community engagement, support, constructive thinking and criticism. The College’s current status affords the opportunity to think about how it reached this point and to strategize about what our next big – and we hope bold – steps will be.