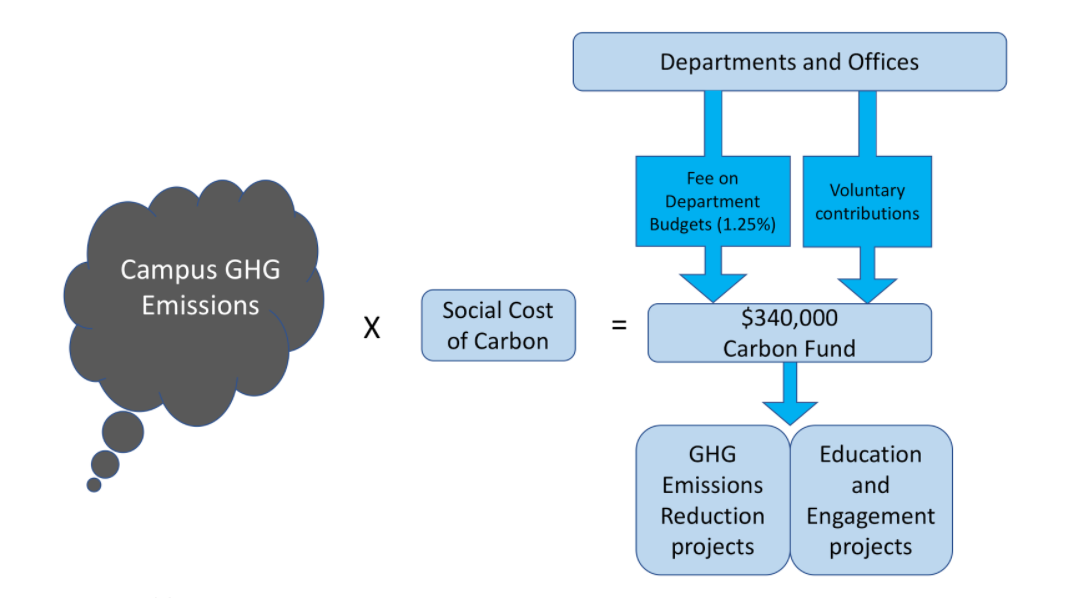 Sustainability and climate action planning is a long-term project that spans many 5-year budget cycles, more than one master planning cycle, or many other common planning mechanisms used by colleges and universities. Many signatories of the Second Nature Presidents’ Climate Leadership Commitments struggle to maintain focus on long-term decarbonization after the initial attention to the topic created by signing the Commitments or developing a climate action plan. The reasons are familiar: senior leadership transitions; separation of climate planning from overall strategic campus planning; lack of capital investment and over-reliance on operating funds to achieve carbon reductions; and many others. In this blog, we offer a case study on utilizing a carbon pricing mechanism to address these challenges.

Climate change threatens to impose wide-ranging social and economic disruption on our world. Unfortunately, the fossil fuel industry and carbon-intensive sectors experience little of the global cost of their activities, and have no market pressure to alter course. Such is the conundrum of motivating the global economy to decarbonize, and the challenge that a group of Swarthmore faculty and staff grappled with in the summer of 2015.

In a shared reading group experience, they explored a popular global solution- carbon pricing. Carbon pricing is among the most powerful and effective policy tools that we have at our disposal to tackle emissions reductions at a national level. Support for carbon pricing is widespread from all corners, from President Obama; to Jim Yong Kim, the president of the World Bank; to climate scientist James Hansen; to former US Labor Secretary Robert Reich; and conservatives like Lindsey Graham and Bob Inglis. In fact, carbon pricing is the first-choice strategy for reducing emissions for 81% of economists who have published work on climate change.

Carbon prices seek to take the costs of the broad global impacts of carbon emissions and make them felt by those extracting and emitting carbon. A carbon price ultimately makes fossil fuel extraction unprofitable and makes zero-carbon energy more competitive. Broadly, carbon pricing includes both carbon fees and cap-and-trade systems. Critically, if the policy is designed in the right way, such as with a fee-and-dividend system, those who consume less than the average amount of carbon, generally lower income people, will come out ahead. Revenue-neutral carbon prices, have some real bipartisan support, a rare quality among climate solutions. With a sufficiently expensive price, a carbon price could actually keep the world within our two degree goal. Carbon pricing is a fair, feasible, and powerful climate solution. So, a carbon price may make for good state or national policies, but how to translate that to college and university campuses? How would a carbon price fit in with the landscape of on-campus sustainability work?

Informed by the models used by many businesses and Yale University, the Swarthmore reading group designed a proposal to create an internal carbon charge system at the College. After an extensive series of discussions with stakeholders and decision makers, the College decided to move forward with a pilot carbon charge in the 2016-2017 school year.

Swarthmore’s Carbon Charge has been a valuable tool for reducing our emissions, providing funding for sustainability projects, and most importantly, providing a platform for education and engagement with our community about carbon pricing policy solutions.

How does an internal carbon charge work?

Carbon pricing aims to incorporate the external social cost of carbon into the decision-making of those extracting and burning carbon. At a national level the most popular ways to do this are through carbon “caps” or through a fee on extraction. On college campuses, there’s not a lot of extraction to tax, but there’s a wide variety of strategies for incorporating the social cost of carbon into decision-making, depending on a school’s priorities, resources, and structure.

A shadow price is among the most popular strategies in businesses and governments, and is possibly the simplest strategy to implement. If we want to account for the social cost of carbon in our cost-benefit analysis and decision making, the easiest way to do that is having a policy of penciling it in for big institutional decisions. For example, when constructing a new dorm and determining how to heat it, a school might consider geothermal wells or a natural gas boiler. The first financial cost, and depending on the discount rate, the lifecycle financial cost of the geothermal wells might exceed those of the natural gas boiler. So a rational cost-conscious institution would opt for the boiler. A shadow price is an added estimate of the lifecycle carbon emissions of each option multiplied by a social cost per ton figure. Because the emissions from a boiler are so much greater than they are for geothermal wells, they might tip the balance in favor of the wells. 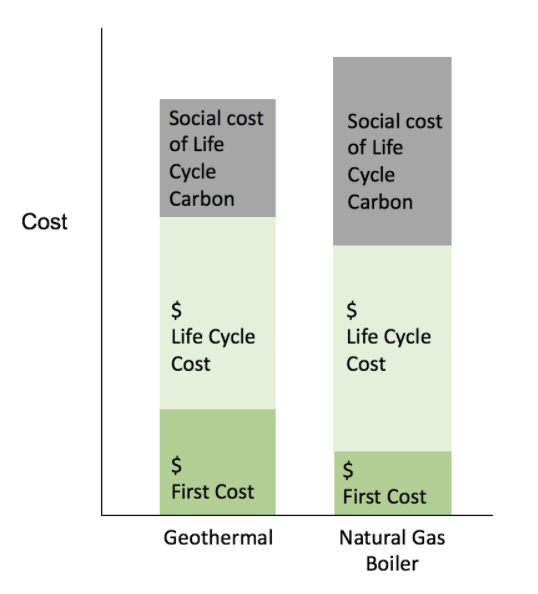 An example where using a shadow price changes a construction project plan. The natural gas boiler has the lower lifecycle financial costs, but adding the social cost of the lifecycle carbon emissions to each project suggests instead that the geothermal wells are the “cheapest” way to heat the dorm.

This same strategy can be used for construction, purchasing, energy conservation measures, and other aspects of a school’s operation. A benefit of an institutional commitment to shadow pricing is it helps to justify and normalize life cycle cost analysis for projects. In Swarthmore’s case, this was not standard practice prior to carbon pricing, and the College is now working to incorporate it in the design process.

Another strategy for including the social costs of carbon in decision making is to levy a fee for that social cost of carbon- an internal carbon charge. There are a lot of ways to design one, but the underlying theme is that departments and offices will have a financial incentive to reduce their emissions. In its pilot year, Yale impressively implemented three internal carbon charge structures simultaneously.

Swarthmore’s Carbon Charge program includes both a shadow price and an internal carbon charge on our departments and offices. The faculty and staff reading group encountered a challenge for designing our charge however- we don’t currently have sufficiently reliable data on our purchasing, travel, heating, and electricity to assign responsibility for emissions to particular departments. Swarthmore decided not to let the perfect be the enemy of the good and to prioritize education over incentivizing reductions for our first few years while we get a handle on emissions tracking.

In our pilot year, Swarthmore is levying a charge based on our total campus-wide emissions. For our pilot year, our campus emissions multiplied by the social cost of carbon figure came to $300,000, which is 1.25% of our operating budget, excluding salaries and benefits. We are using department budget size as a rough proxy for emissions quantity, and this year levied a flat charge of 1.25% of each department’s annual budget. In addition to the required fee, in recognition that our social cost of carbon figure is below conservative estimates of the actual social impacts of a ton of carbon, we invited departments to voluntarily contribute additional funds to the charge, which yielded another $40,000.

The revenue from that charge is pooled in a Carbon Fund to support sustainability initiatives, including a new Green Revolving Fund, renewable energy installations, planning and analysis work, metering upgrades, and education initiatives. All of those projects help us reduce the college’s total greenhouse gas emissions.

At Swarthmore, one of our students  working on implementation of the internal carbon charge, Aaron Metheny, joined the Put A Price On It campaign. The campaign is working to add higher education’s voice to the chorus of religious groups, businesses, nonprofits, municipalities, and individuals calling on our elected officials to put a price on carbon nationally. With guidance and support from the Director of Sustainability, Aaron brought their letter endorsing a national carbon price to Swarthmore President Valerie Smith, who agreed to add her signature. Beyond signing, she worked with the Presidents of Vassar College, Dickinson College, Wesleyan College, and Pitzer College to invite their peers, other college and university presidents, to sign on as well. Since their outreach in February, over twenty additional institutions have joined the campaign.

How you can plug in

We are extremely excited about the role that carbon pricing will have in building a path to a just and sustainable future. We believe this is an important new frontier for sustainability in higher education..

Adopting an internal carbon price at your institution can be a powerful tool for reducing on-campus emissions, providing a funding stream for sustainability projects, and engaging your community about carbon pricing policies. A shadow price on construction decisions is a particularly feasible strategy to adopt for most schools. We are eager to help talk through more details of our own Carbon Charge and help you think through what a design and implementation process could look like on your own campus.

Adding your President’s signature to the Put A Price On It campaign’s letter can be a powerful way to lend your school’s voice to the larger national dialog. We’re also excited to connect you with the organizers of the campaign and to discuss the factors that you might consider as you think about adding your institution’s name.

Pricing carbon will be an important component of charting a path to a decarbonized global economy and we look forward to bringing higher education into that dialog with all of you.